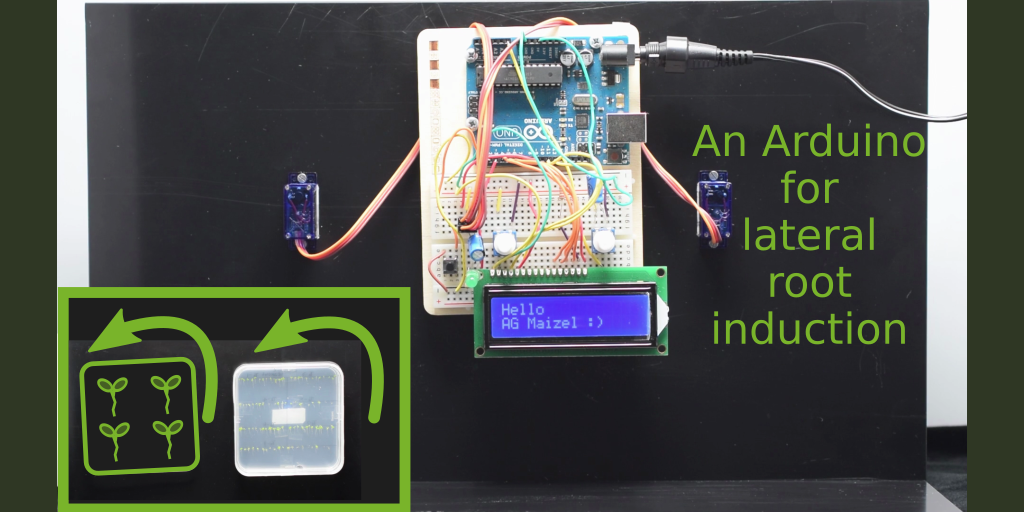 An Arduino to induce lateral roots when you’re sleeping

In my current lab, we are working on the formation of lateral roots of the model plant Arabidopsis thaliana. For some experiments, we need to observe precise events of the development in a large population of plants, or to synchronize the development of lateral roots over many plants. To do so, we can turn the plant upside down. As the apex of the root is always trying to point toward the floor, it will bend. In the U-bend of the primary root, a new lateral root will be triggered. The new lateral root will start being visible at the microscope a couple of hours after this gravitropic stimulus, and will develop at a known pace until full emergence from the primary root (around 48h later). Problem is that for some experiments, we need to turn the plant in the middle of the night. To avoid going to the lab at indecent hours, we may use this Arduino device to do it right on time.

Arduino is a programmable microprocessor that can be connected to some electronics elements such as an LCD screen or motors to create automated devices. The low price of the electronic components, its abundant documentation, and freely available software makes it quite popular among inventors and artists.

A first version was reported missing

My group leader had made a first simple Arduino device rotating one Petri dish upside down. It had one servo and was connected to an electric timer. For defined hours, the timer would let the Arduino being powered, which would trigger the rotation of the servo. Unfortunately, when I joined the lab, this device had vanished, as well as its code.

A new Arduino to replace the missing one

I discovered the Arduino system while doing an art and science project during my PhD. I was part of a group of four PhD students from various backgrounds, a freelance designer and an art student. At that time, we used an Arduino to make a press button that would randomly trigger an LED and surprise, but also question the visitor of the exhibition. I saw it build but I did not made it myself. When I got the occasion again to try the Arduino system, I volunteered to build a new device for my lab. As nothing was left from the previous one, not even a picture, I had to imagine a brand new version. I decided to make the best use of the different components of the Arduino starter kit: I replaced the electric timer by a countdown and an LCD screen. I originally designed the system for one servo. At the very end of the project, my boss and I tested and added a second servo in parallel.
For the programming part, I got inspired by two of the Arduino starter kit projects, and two other online tutorials. The Crystal Ball Arduino project helped me understand the LCD screen, and the Mood Cue, the rotation of the servo. I then searched for more tutorials to add the button/LED combination and the countdown function. I found the information I needed on a basic tutorial from the “Site du Zéro” [https://openclassrooms.com/courses/programmez-vos-premiers-montages-avec-arduino/le-bouton-poussoir], and on a blog explaining how to add a startime preselection on an old washing machine [http://colin.pitrat.free.fr/?p=393].
I also visited the FabLab on the Wageningen university campus. There I could discuss the difference between servo and motors, and also, the different ways to power the Arduino, since it would be located in a growth chamber.

How is it working?

A 1min video presentation of the device:

Sharing the code and the description of the electronic circuits

Sharing knowledge is part of the philosophy of the Arduino systems, and Arduino would not be so popular without an active community sharing codes and tips. Searching and reading tutorials, assembling the electronic components and coding the programm to pilot the Arduino took me in total around ten hours to get the first full version. This is a not a lot, but, as a complete beginner, I would have loved to have an already made tutorial, that I can follow blindly. Thus, I tried to document as much as possible the circuit using pictures and the Fritzing software. And I commented my code, following the instructions of this website: https://sites.google.com/a/cabrillo.edu/cs-11m/howtos/cppdoc and I made it available on my GitHub arduino repository.

In conclusion, it was fun to build an electronic circuit. Much funnier than what I remembered from physics classes. I also enjoyed coding and having the possibility to see immediately the effects of the new lines of code I had added on the Arduino device. To add to this success, the system is now used by my lab mates.

Source code and documentation for this project